When you make a component a clickable hyperlink, you can link a URL or a report with that report.

Using this feature you can make “drill-down” reports or “linked reports”. 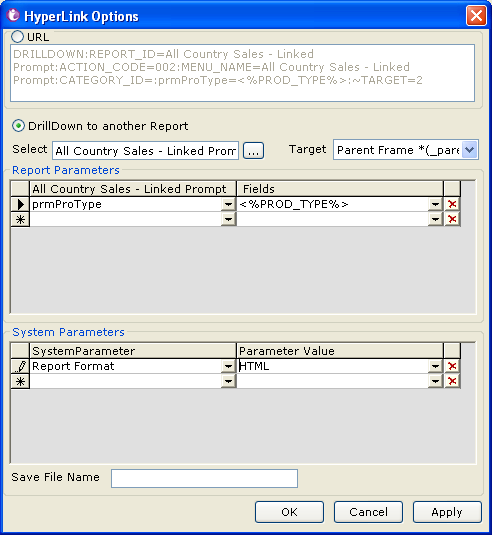 Hyperlink the field to open a specific URL

Hyperlink the field to open a specific report

Specify System Parameter(s) and their value(s) to be considered for the report being set as hyperlink.

System parameters and their values

On a report, when a user clicks a hyperlink, Intellicus starts generating the hyperlinked report (also known as drilldown report) and displays it.  For longer child reports, this may take some time.

Use PREFETCH_DRILLDOWN to save time taken for generation of child reports.  When this feature is turned on, Intellicus will generate drilldown report (child report) along with the parent report (even if the user has not clicked the hyperlink on the parent report).  This way since the hyperlinked report (also known as drilldown report or child report) will be already been generated before the user clicks the link, user will get a much faster response.

This is how it works