While interacting with charts under High Speed View, you can select any chart type to represent your data and perform actions to show easily comprehensible view. Some of the operations that can be performed using chart visual aspects are shown in below examples.

Tooltip: You can drop a measure from Fields to the Tooltip section on the right-bottom pane. This measure would display as tooltip at the point where you hover mouse on the chart. For example, you would see a measure named ‘Amount Paid’ (apart from the default measure: Total Value) on the Tooltip as shown in Figure 23.

Color: You can add any measure, dimension or attribute to Color on the right-bottom pane. You will see a variation in color gradient for minimum (lightest) through maximum (darkest) values for the selected measure. For example, a measure called ‘Cost of Insurance’ when added to the Color visual aspect would look like as shown in Figure 24.

When you drop a measure on the Size visual aspect, you can see bullets of varying sizes for the selected measure value on the chart. For example, a measure called ‘Premium Amount’ when added to Size on a line chart shows bullet points with size depending on the value of the measure. The measure on Size also appears on the tooltip.

You can drop only one measure in the Size section. If you add another measure in Size, the previously added measure gets replaced.

Click the cross symbol adjacent to the measure to remove it from Tooltip, Color or Size on the right-bottom pane.

You can carry out expand / collapse and drill actions by clicking a data point on chart.

When Expand action is selected, the chart will be expanded to show the next level details. For example, when you expand the Country dimension say “France”, you can see states of France along with the country as shown in Figure 26. 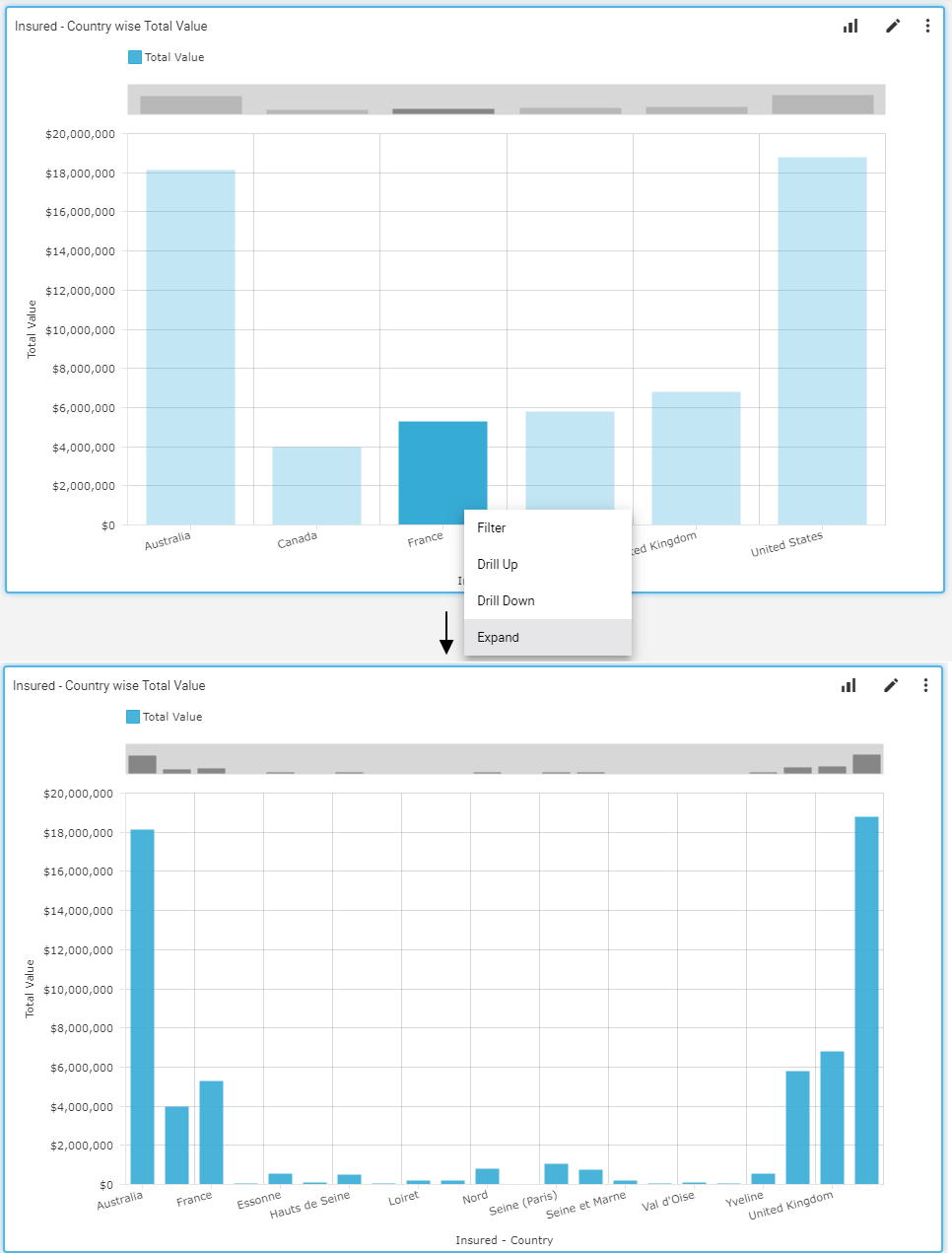 When the Collapse action is selected on the expanded member (the member on chart you had clicked to expand), the members collapse to show the parent level information. For example, when you collapse “France”, the states of France get collapsed to show only the country name as shown in Figure 27. 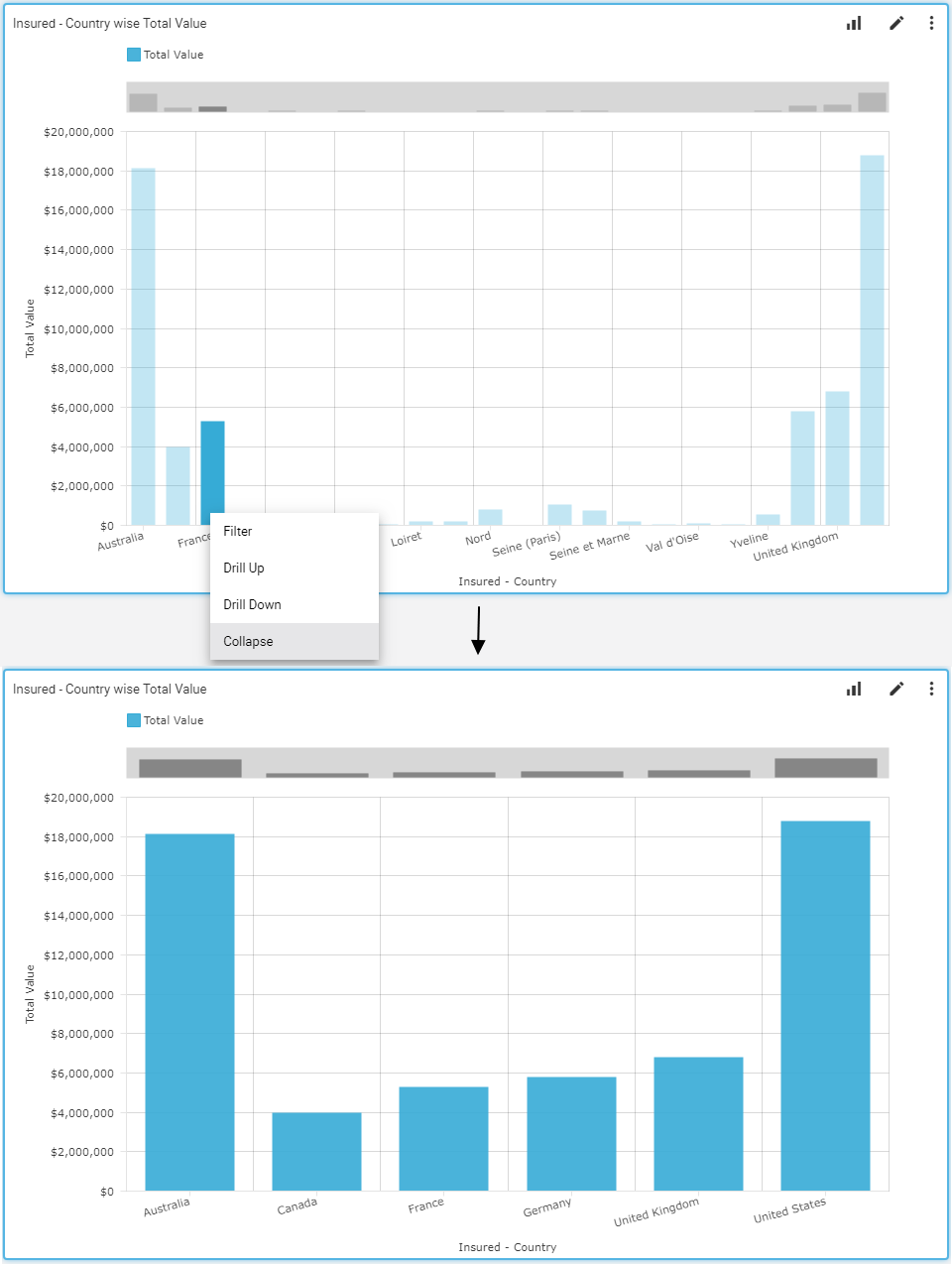 Drill down a level and drill up

icon that appears on the upper right corner of view to drill the entire chart down one level.   This will hide parent information and display next level detail. For example, you can drill down the Country dimension to get states of all countries as shown in Figure 28. 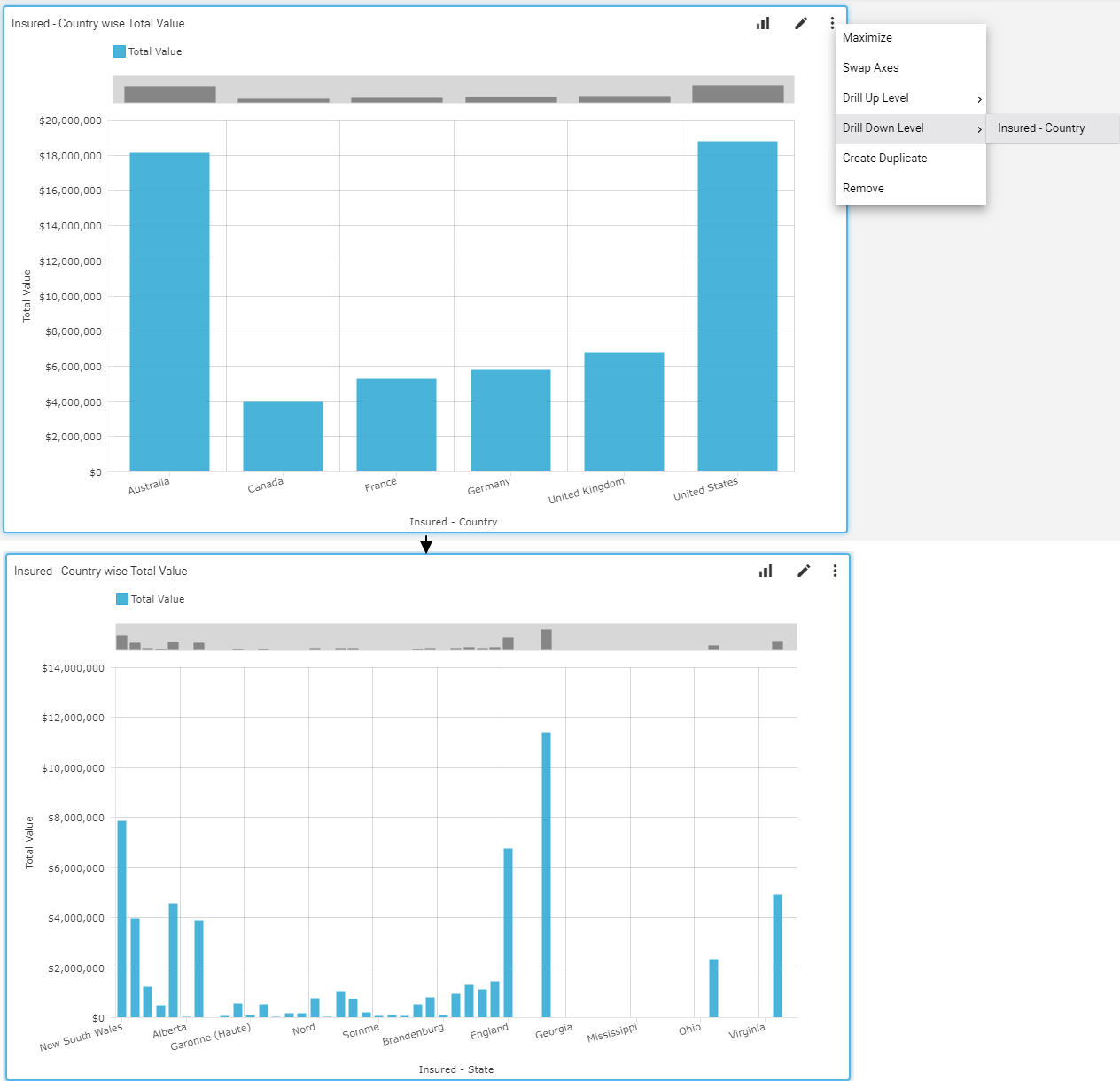 Figure 28: Effect of “Drill down level”

Clicking the Show all option would show all the data points on the chart.

Drill Up Level:  When chart is already drilled down, click this option from

icon to drill up one level. In the above example, the chart can be drilled up from states level to countries level as shown in Figure 29. 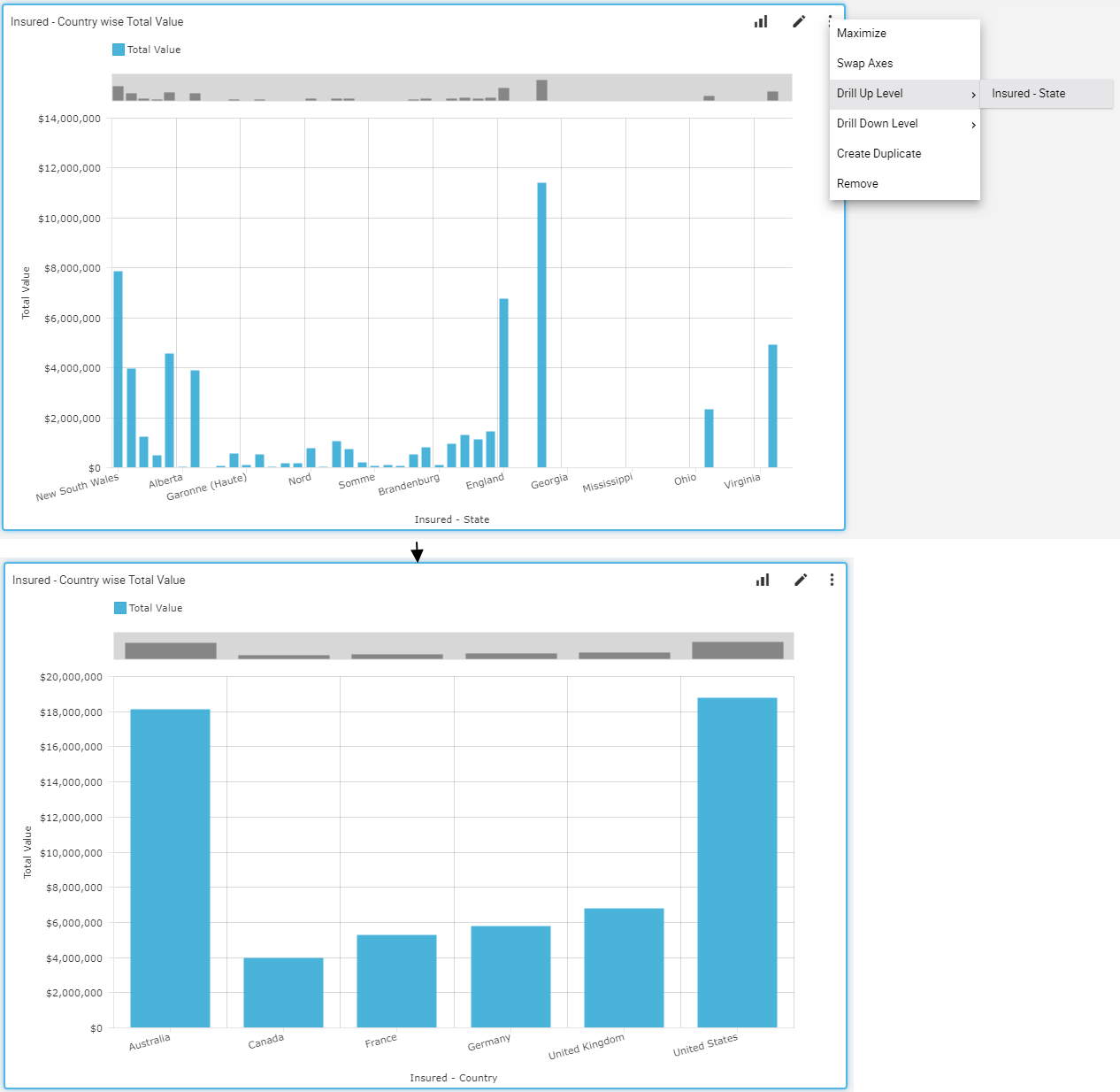 Figure 29: Effect of “Drill up level”

Drill down a member and drill up

For example, you can drill down a specific country say “France” to get all the states under it as shown in Figure 30.

Figure 30: Effect of Drill Down a member

Click the member of the chart that you want to drill up. You can click Drill Up option on the menu to drill up the member. In the above example, you can drill up the states to see countries as shown in Figure 31. 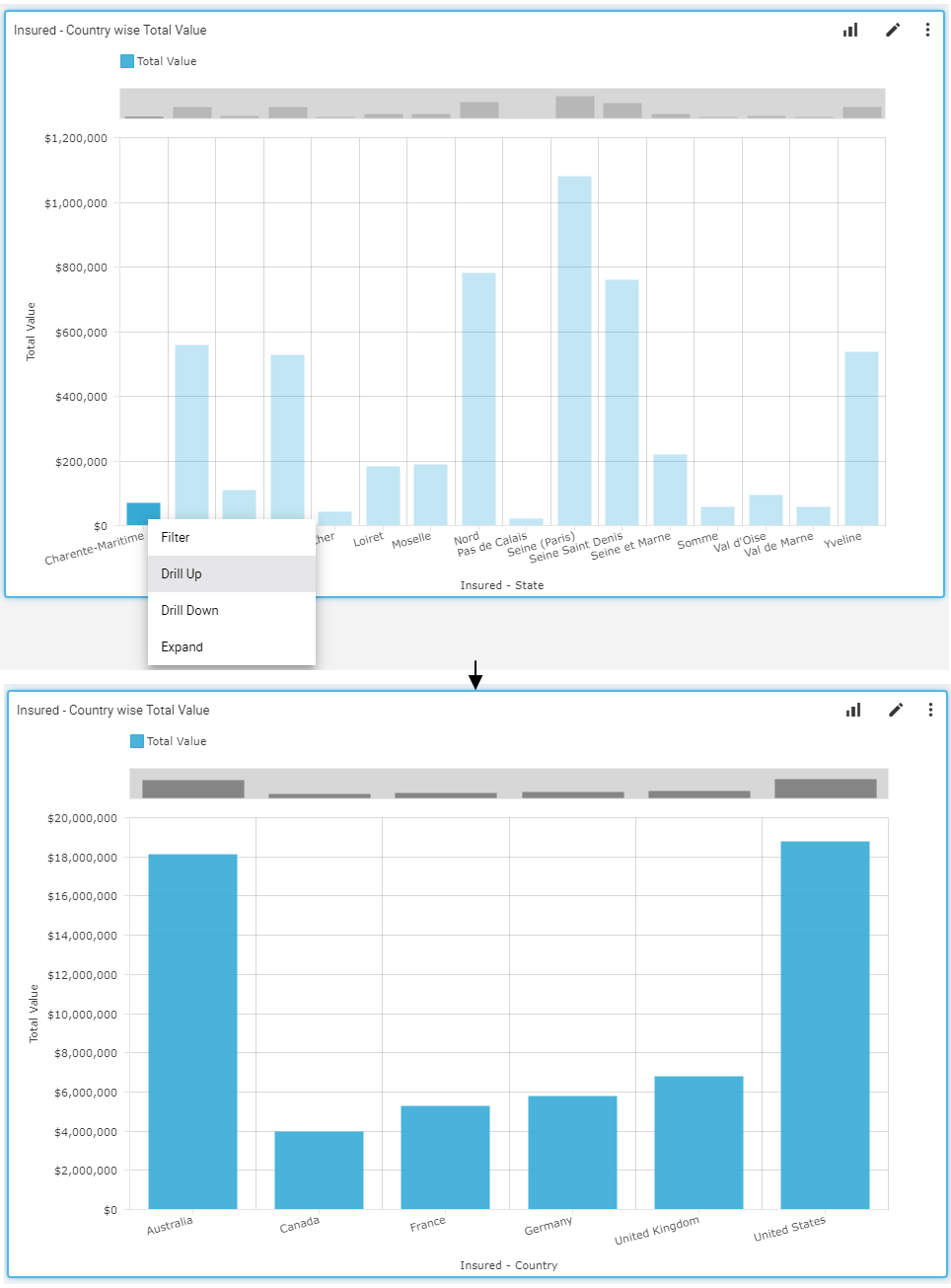 Figure 31: Effect of Drill Up a member

You can download the chart as PNG, JPG or SVG image format on right-clicking anywhere on the chart.