When creating a multidimensional analytical object, sometimes you might need to use the distinct count measure. Aggregating measures now allow you to calculate the Distinct Count for the field data you are aggregating. For example, to know the number of unique users who buy products of certain type. Since one customer may buy multiple products, the distinct count measure will be useful in such cases.

The below image shows Analytical Object in case the hierarchy is ignored. 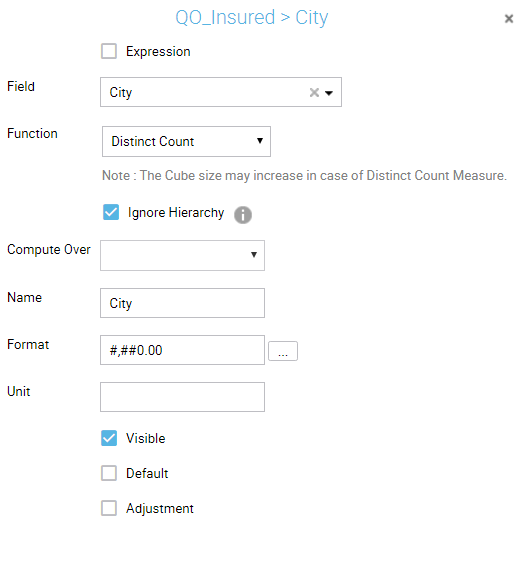 The count of cities with a common name would appear as 1 at the Country level on the report in case the hierarchy is ignored.

Alternately, the count of cities with a common name would appear as 2 at the Country level in case the hierarchy is not ignored.

Figure 11: Distinct Count Measure example when Hierarchy is not ignored

The supported statistical functions to aggregate data are as follows:

To achieve this, you have to specify either primary key of the Fact table or a composite key that can uniquely identify a measure value.
This key when combined with the measure values will create distinct measure values.

To calculate the median/mode/range you need to add another new calculated measure with following MDX respectively:

A sample report showing Median, Mode and Range of product price is given below: